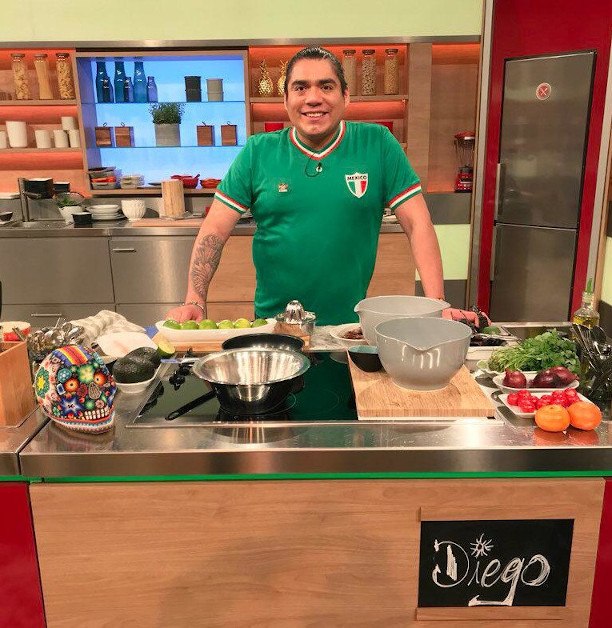 For Diego, being able to compete in the program “Die Küchenschlacht”, which has been shown on German television for the last fourteen years, was an achievement in his development as a cultural manager. Unlike the Mexicans, he knows that for Germans teaching emotion is not something very common. But Diego Serratos does not mind having cried on German television since the important thing for him is to be honest. In a telephone interview that we were lucky enough to do with him, a very emotional person declared that at 35 years of age and having lived in Germany for 16 years, he has learned to demand dignity, not without first having to take a personal tour to meet itself. Being a Mexican in Germany who does not hide his homosexuality but, on the contrary, proclaims it with pride, has sometimes caused him to be misunderstood, even disrespectful. He does not deny that it was a path of pain and depression but today, Diego tells us his story with a smile and humility.

Arriving alone and very young in the Germanic country, the search for these values often cost him alterations and depressions. Four years ago he had a severe fall that made him examine and defend his self-esteem. As a result, he understood that only by bravery and appropriating what he considers to be his strength in his own niche and persistently charting his path could he reach his investiture.

Belonging to the first generation in Germany to finish with the title of cultural manager, Diego is not only a gastronomer but a specialist in everything that has to do with cultural matters. He worked in the Mexican embassy in Germany for two years but could not engage in the air of the institutions that he sees as if they wanted to pigeonhole him in ideas and behaviors that simply did not express it.

Even so, he gained a lot of experience as an advisor to the chefs that the embassy invited for the various gastronomic events that were presented. Having a high level of the German language, the then ambassador Patricia Espinosa Cantellano, who was in charge from 2013 to 2016, trusted him to help them with the communication challenges they might face during their stays in Berlin.

As a chef her husband, Diego knew the culinary infrastructure of the city and was the perfect person for the position. What the ambassador did not know is the great interest he had in gastronomy. His curiosity and desire to learn motivated him to approach the chefs and get involved in the kitchen whenever possible.

One of his first approaches was with Gabriela Ruíz Lugo, a chef from Tabasco who currently owns two restaurants. "Gourmet MX", located in Tabasco and "Carmela y Sal" which is one of the best restaurants in Mexico City. Gaby, as she calls her, was only 24 years old and unstoppable when she cooked. Diego, who describes her as a lively and very open woman, would accompany her helping her until late, preparing stew after stew between talks. Very soon, the chef realized that Diego's thing was cooking and told him that maybe he should focus on it.

A year later, chefs Luís Felipe Barocio and Roberto Solis from Mérida arrived in the city for a Mayan event. With them they brought Delfina and Elide Castillo Tzab, who with six other women, all relatives, have formed a cooperative called “Semillas de Dios”. They produce achiote, black collection and ground spices, among other high quality products, in an artisanal way. Diego describes his project as one of women, by women and for women who loved him and approached them to learn. They used to call him "kinich" which means "face of the sun" and they told him that when he cooked he came back to life and that he had to follow his passion.

Finally and after irreconcilable differences with a famous chef with many restaurants in Mexico City, he chose to separate from the embassy where he was not very happy and started working with the great German appliance manufacturer, Miele. He created a project that he called “Expedition Trip to Mexico”, where he presents original dishes from Mexico, adapting the recipes slightly to suit German tastes. In the workshops he gives about eight times a year, Diego has discovered that he likes to teach and explain how Mexican food is prepared. He has realized that he has a gift that he is applying to stand in front of cameras and in front of an audience and give a dedicated part of himself that he also does not see as that difficult.

That was proven when he was asked to return to the program “Die Küchenschlacht” in the contest he participated in and came in second place! In a vote that was carried out with the participation of the public of the program to decide which of the contestants would return for one more episode, Diego was chosen. For him, it was a confirmation that Mexican cuisine is of interest to Germans.

Apparently not only he has this opinion since by achieving second position in the "Die Küchenschlacht" cooking contest, Miele has doubled the "Expedition trip to Mexico" workshops, giving the Mexican the opportunity to present 16 instead of 8 per year. In addition, Diego has two more concepts that he will present with the support of the appliance company. There are two "workshops" or workshops that, starting next year, will be giving globally in countries where Miele has spaces of the "Miele Experience Center" which in fact, there is currently one in Polanco, in Mexico City.

After making the debut of a name workshop "How to Cook"Starting with "How to Cook Tacos" and "How to Cook Enchiladas," the idea will expand to include other Mexican foods. These workshops will last 90 minutes each, at a cost of € 30 with all ingredients included. Diego will teach his German students how to make some sauces, marinade, pico de gallo, etc. But more than anything, it will teach you how to distinguish authentic Mexican food from Tex-Mex. Think that people have shown a great interest in learning more details about our cuisine such as how to fill a taco, how to serve it and how to eat it. You want people to learn the differences between a taco, an enchilada, a burrito, or a quesadilla.

The second workshop is more individual and is about teaching professional German chefs how to adapt some of their recipes to make authentic Mexican cuisine. Also, he will be preparing drinks since he is a certified bartender. He hopes to transmit the cuisine of our country to people who can make changes to the menus that are presented by restaurants and those people are made up of chefs from Germany.

This project will take place in an important restaurant in Frankfurt called “Pacífico” and which has a 10-year history. He is very grateful for the opportunity to be able to show his cuisine, that of his country and culture, to people who cook professionally and the idea is to add Mexican restaurants from Germany to those that he would visit so that they start serving authentic Mexican food.

Diego believes that many of the Mexican restaurants in Germany and probably in the rest of Europe and the whole world, have settled down to cook for people who do not know the true cuisine of the country. This becomes a boomerang once the Mexican population grows and these same restaurants are criticized by our own compatriots for not serving authentic cuisine but one that imitates it. He thinks that this latest project can be of great help to these businesses, teaching them products and new ways of cooking traditional recipes.

Diego Serratos does not consider himself a chef. Yet he has found himself in what he does. Now you know why I was not happy at the embassy. He knows that not being able to express himself and having to be in the shadows, following the path that others trace for him, is definitely not his thing. Diego loves to show up. He loves having his own voice. Not to talk about him but about his culture. He wakes up at night to write what comes to him. A recipe, something her grandmother taught her. Diego is an artist. A Mexican in Germany who both lives and transcends his education as a cultural manager. Diego is already happy!

If you have any questions you would like to ask Diego, write them in the comments and we will communicate them to you shortly.

All images courtesy of Diego Serratos