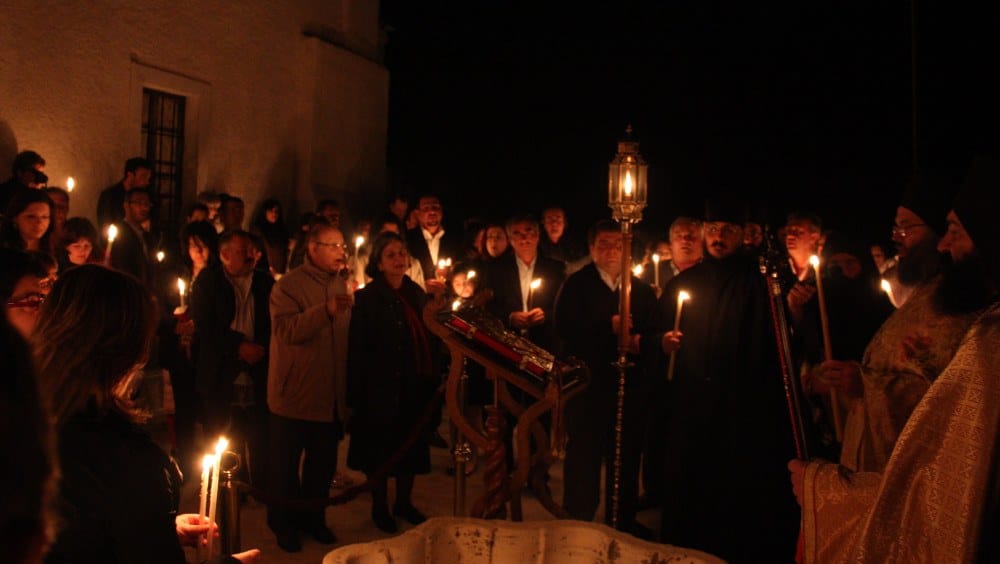 Many probably know that Easter is not celebrated on the same date in all parts of the Christian world. For the Catholic and Orthodox churches specifically, it is the culmination of Holy Week and consequently, it always falls on Sunday. However, the difference in the dates of its celebration has its origin in the First Council of Nicaea in the year 325, when it was established that Easter is celebrated on the first Sunday after the full moon, after the spring equinox. In the Northern Hemisphere, this date is March 21. Based on this calculation, Easter Sunday falls between March 22 and April 25.

Still, the Orthodox Church follows the Julian calendar while the Catholic, the Gregorian. Because the Gregorian March 21 corresponds to the Julian April 3, Orthodox Easter falls between April 4 and May 8 for the Orthodox. We, being in Greece, which is mostly Orthodox and this celebration being the largest in the Hellenic world, we celebrate Orthodox Easter Sunday in accordance with the customs that are dictated here, those that lend themselves to good eating. But hey, there is always room for deviations and good food is customary in both Greece and Mexico.

In both religions, the season before the arrival of Easter is known as Lent which is a period of fasting of forty days, although it varies somewhat due to how the days are counted according to the region. For the Orthodox Greeks, the first day of Lent is Clean Monday or Pure Monday and in the six weeks that follow, foods that contain blood, such as meat and fish, as well as dairy, eggs and the oil. Although the fast ends on Lazarus Saturday, one more week is added to it, until Easter Sunday when the carnivorous feast begins.

Lamb is the favorite animal to celebrate the end of the sacrifice after the abstinence of the previous weeks, since its consumption has its origin in pagan customs, being of great symbolic importance, also in Christianity. Traditionally, it is preferred whole and young since animals born around Christmas are usually slaughtered. In the Hellenic country, they are mounted on stakes or skewers and roasted for many hours, until the meat becomes soft, separating from the bone.

Obviously, a whole lamb cannot be eaten by a family of four or five members, so you have to throw a party, But in this difficult year, with COVID-19 or coronavirus as it is commonly known, the curfew that has been implemented, it didn't leave much room for that. So we think that it is better to consume our broken lamb since our family has only three people.

What to prepare then. Immediately, our reminiscences transported us to the countless trips around the various states of the Mexican Republic and the many barbecue tastings that we had the pleasure of doing. Of course, we do not dig holes in the earth to make our oven and we do not place layers of stalks to achieve this unique flavor that is given to meat with its slow cooking but taking into account the paved cities and the lack of many ingredients that are easily they find in Mexico, one simply has to figure it out. Here is a simple but delicious recipe to prepare lamb barbecue in a European specification home kitchen. We assure you that the result is to die for!

Berenice had bought the meat days before for the Easter celebration, since even with the confinement still standing, the Greeks were not going to miss the celebration and she was sure that she would have a huge line to enter to buy the meat. It was the first time that he would cook lamb, since last Easter, the men were the ones in charge of roasting it. With the days close to the party, I didn't have a specific idea of how to cook it, perhaps a stew or baked. However, an internal voice, very Mexican, told him: make barbecue tacos with consommé. Little by little that voice became stronger and supported by family members, he took the courage to continue with his preparation.

Do you remember when we went to have barbecue in Gualupita? was one of his first questions. Gualupita is a town that is dedicated to the manufacture of woolen garments and belongs to the Edo. from Mexico. We would travel there in the winter season to stock up on some clothes for our business at that time. So the barbecue and consommé stop was almost mandatory. She was so moved by this rich memory of the barbecue that she began to come up with ideas for our Orthodox Mexican Easter.

On Friday, he decided to proceed with his idea. It had already implanted itself in his head. This year I would prepare the lamb with a variation. I'd make barbecue tacos! Now, you had to check if it had the necessary ingredients to carry out the preparation.

Since he did not have Maguey stalks, perhaps he could use banana leaves, asking the favor of our neighbor who has a banana grove. Unfortunately, the neighbor had pruned his tree and had to scrap the idea. He checked his supplies of dried chilies and luckily, he still had some. Enough to prepare the sauce and consommé. It did not have a steamer but a large pot, yes and that was the important thing.

Onion, coriander and lemon for the finishing touch

On a comal, he tame all the ingredients little by little, starting with the onion and garlic. Then, he added the chiles and tomatillo, stirring constantly to prevent the chiles from burning. She added a little water to soften them and left them on low heat for a few minutes. He put all the sauce ingredients in the blender, along with a little oregano, pepper and salt and blended them. The sauce was ready for when the barbecue would come out.

He was preparing the onion and cilantro that only require finely chopped and reserved them for the last minute.

Lamb generally comes with a lot of fat, so it was necessary to clean it as much as possible. Once most of the fat was removed, he added the salt and massaged the meat lightly. While the meat was resting with the salt, he made the preparations for the consommé. In his case, as he did not have a steamer, he put a small pot or a metal container inside the large pot, to be able to contain the liquid that would produce the steam. There, he placed the chickpeas soaked in water the night before, the onion, garlic and pasilla peppers previously deveined and without seeds. Finally he added the water, trying not to overflow the small pot and place the rack to continue with the bed of meat. If I had maguey stalks or banana leaves, I would place them on a bed to put the meat. The stalks, like the leaves, would be roasted so that they had greater flexibility. But since he didn't have either one, he made the bed with baking paper and put the meat there until he finished it.

The time had come to place a layer of aluminum foil and finally, due to the lack of stalks or leaves and on top, a plastic bag, in the same way as the tamales. He placed the lid and something on top to put pressure to prevent the steam from escaping. It was not necessary to salt the consommé since the same salt that the meat had and the juices that it would release would be enough to give it a good flavor.

He put the pot on the stove over high heat and waited until it boiled and once it had come to a boil, he turned the heat down, keeping the flame very low for 3 hours.

At the end of the cooking time, he opened the pot and checked that the meat was perfectly cooked. He pulled out a bone, watching it come out effortlessly. It was finally time to serve us a good plate of consommé. He added a little onion, coriander and lemon, as she has always liked. Everything was ready to prepare some good tacos, mincing the meat a little on a board. And finally, the moment we were waiting for. We place the meat in a hot tortilla, we add a little coriander, onion, sauce and a little touch of lemon and! , again. She says that now that she saw how easy it is to prepare this Mexican delicacy, she would not wait that long and would repeat our Easter Sunday, any Sunday of the year. We totally agree!

Being Mexican expatriate or not, how did you celebrate Easter? What did you prepare for these days? Describe your Easter Sunday table in the comments. We would love to meet you!