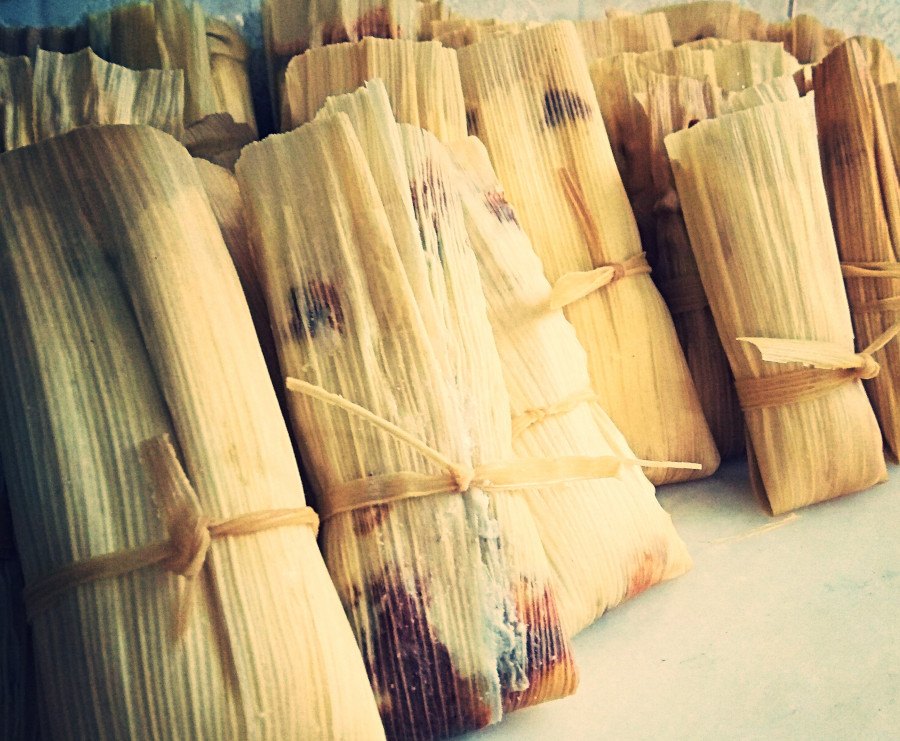 Once again, the biggest tamaliza festival in Mexico is about to come. On January 6 the offering of gold, myrrh and incense of the Magi to the little Jesus is celebrated. Custom dictates that a number of dolls that represent the child god be hidden in the thread and those who are touched by one of them during their partition, will be in charge of bringing the tamales on February 2, Candlemas Day.

But why eat tamales that day? The answer, once again, has to do with the miscegenation of cultures. The tamale, a maize food, used to be offered since pre-Hispanic times in the various celebrations of the Aztec gods so that people would favor the needs of their lives, being them personal or of the people themselves, such as, for example, the weather or war results.

Although corn is found throughout most of the Americas, it most likely originated in Mexico and displaced other peoples, along with other foods such as tamales. Many do not know it but we celebrate the presentation of Jesus to the Temple of Jerusalem on the second day of the Atlacahualo month, that is, February, the same day of the year that was dedicated to honor Tlaloc and his tlaloqueyes!

This explains the date of the tamaliza of the Day of Candlemas. This custom is actually a continuation of a celebration that comes from our ancestors mixed with the religious beliefs that the Spanish brought to the “new world”.

For most Mexicans, if asked to name a corn product, they would probably answer "the tortilla." And although it surely has enormous importance in their diet and in that of the Central American region in general, the tamale was savored before the tortilla by the Aztecs.

Mexicans, thinking of corn, think of corn that is everywhere, however, Beatriz Ramírez Woolrich, who did her doctorate in food anthropology at UNAM, tells us that corn as it is known today is what is gave after mixing different wild grains.

You cannot put an exact age but it is known that corn has been on the earth for about 4 thousand years. However, the varieties found today were cultivated in much more recent times.

Cortés and his conquerors, stepping on Aztec land, were served popcorn, which is thought to have been the first way to eat corn and what else? but tamales.

But surely, the tamales that Cortés and his men tried were very different from now. The Mexica, in addition to what is customary today to wrap, used to wear flamenco, frog, gopher and axolotl!

Tamales or tamalii, as it is known in Nahuatl, were made when a natural disaster occurred, as an offer to the gods in exchange for their piety, or simply to worship them.

The meaning of the word tamalii is "wrapped" and basically, it refers to a mace inside which is put from fruits and vegetables to pork, chicken and fish, even beans and honey.

But the ingredient that was added with the miscegenation of America, was the lard that the Spanish brought to the new world. That not only changed the flavor that probably makes it richer on our palate, but also its texture since the pre-Hispanic mace, due to lack of fat, had a firmer and crushed consistency.

The preparation of the tamales was and still is a laborious job. For this same reason it is believed that it was not food of the people, but of nobility since hands are needed to make them, which created myths and beliefs around its elaboration.

To date, the tamale is usually prepared as a family or as a village activity. People form in groups so that hundreds of corn husks are spread with the pasty mace with which the tamales will be filled. Then, they are cooked in pots or steamers and distributed to be enjoyed by friends and family.

The fillings are varied and change from region to region, making the tamale “many faces”. It is estimated that there may be around 500 and more different types among all regions of the country. As food for parties, they are not lacking during Christmas, the Day of the Dead, baptisms and of course, the Day of Candlemas.

A pilgrimage on the road of the tamale

Throughout the Mexican Republic, tamales are eaten in the morning and also at night. How can we forget the tricycle with the ollota, full of red, green and sliced tamales, with this division that separates the sweets that can be found in practically every corner and every zócalo and plaza in the country? Next to it, the other pot, smaller, with delicious rice pudding, cinnamon or the famous champurrado.

Taking a tour of some of the states of Mexico, we realize that perhaps the largest tamale is the one from Zacahuil, also known as the fiesta tamale. This very peculiar tamale is found in the states of which La Huasteca is composed. It is mostly stuffed with pork but the amazing thing is its size, which can measure three meters and weigh up to 50 kilos!

Traveling through Campeche you can enjoy delicious tamales with an exquisite guajillo chili sauce with achiote, garlic and tomato. Its filling is made with almonds, prunes, olives, bell pepper and beef or pork.

In Oaxaca, a tamale is prepared, mostly pork or chicken in black mole but wrapped in a banana leaf. Oaxacan tamales can be found throughout almost the entire republic and are favored by a large number of people, however, in Oaxaca you can try filled with yellow mole and chipilín.

Those from Yucatán, known as “vaporcitos”, are also wrapped in banana leaf but their filling, apart from the classic pork and chicken, can be made of cochinita pibil, especially for the celebration of the Virgen de la Candelaria. Most of the time, they are served with a spicy habanero pepper and purple onion.

Going down further south of the republic, the tamale that is prepared in Chiapas is complex in its preparation and the mole with which it is filled can take up to four days to prepare. Its filling is similar to that of Campeche but in addition to the ingredients that the Campechano has, egg and chipilín are added, which is the quelite of the area.

In central Mexico, in Morelos, he comes across the "tlaconextamalli", also known as "nejos", prepared from a mixture of water and corn with ash and lime accompanied by a rich green mole. Also, you can savor the huazontle seed tamales and the aniseed ones that are prepared mostly for Easter and Day of the Dead.

In Aguascalientes, apart from the bean tamales with slices, the sweet side of our palate can be satiated with pineapple and biznaga tamales, pineapple with eggnog and sweet peanut butter.

Walking along the roads of Michoacán, in towns and cities, we find the

tamales without filling. In the shape of a ball with three, five or seven peaks that depending on the holiday, the corundas, as they are known, are wrapped in corn husks and steamed. Then they are unwrapped and covered with a sauce made of onion, tomato or slices and poblano peppers that can be red or green in color.

The sweet Michoacan tamale is the uchepo with corn mace and butter, to which sugar, brown sugar and milk are added. These are also steamed although for less time and served with sauce, cream and cotija cheese, famous within the state and not only. In the absence of cream and cheese, they can be substituted for condensed milk.

Going to the west of Michoacán, we find the capital of the country, Mexico City. Due to the amalgam of people that has been formed by their migration from the various regions of the republic to this hydrocephalus city, you can find almost all kinds of tamale, if you search well.

However, there is a way to prepare the classic tamale of the city. The "guajolota", as it is known, is a hybrid tamale since it is about putting the tamale of your choice in a roll cut in half.

Although it is not sure if its origin is from Puebla or Hidalgo, it is a tamale that is consumed in the morning by practically all of the around 2,500 colonies in this huge city.

In the north of the country, in the state of Sonora, tamales are wrapped in banana leaves and are medium in size and thinner than those in the rest of Mexico. Guajillo chiles are spread over the moist ground mass in the nixtamal and filled with chicken or beef, pork or ground meat.

Other types of tamale that can be tasted in this state are the "fools" that consist of only dough, without filling, and the "barbones" that are mostly found on the coast, in the city of Esquinapa. The peculiar name of the latter is due to its shrimp filling and the shrimp's head barbs that protrude from the tamale!

From this presentation of the most well-known types of tamale within the great Mexican republic, there is no doubt that there is a lot to mention. In fact, of the more than 500 types that are known, there are about four to five thousand ways to prepare them.

An important detail for every Mexican expatriate in Europe: it is very likely that in the country you live in, you will not find corn or banana leaves. Do not panic! The tamales can be wrapped in plastic or aluminum foil and there are those who say that until better they come out. Even so, if there is any possibility of finding leaves, we personally would travel the necessary distance to get them, although nowadays, they can be ordered from the various online stores scattered across the old continent.

If you have a recipe to prepare tamales for the Candelaria Day tamaliza, we would love to hear about it. Leave it in the comments so that we all find out and be able to try it!