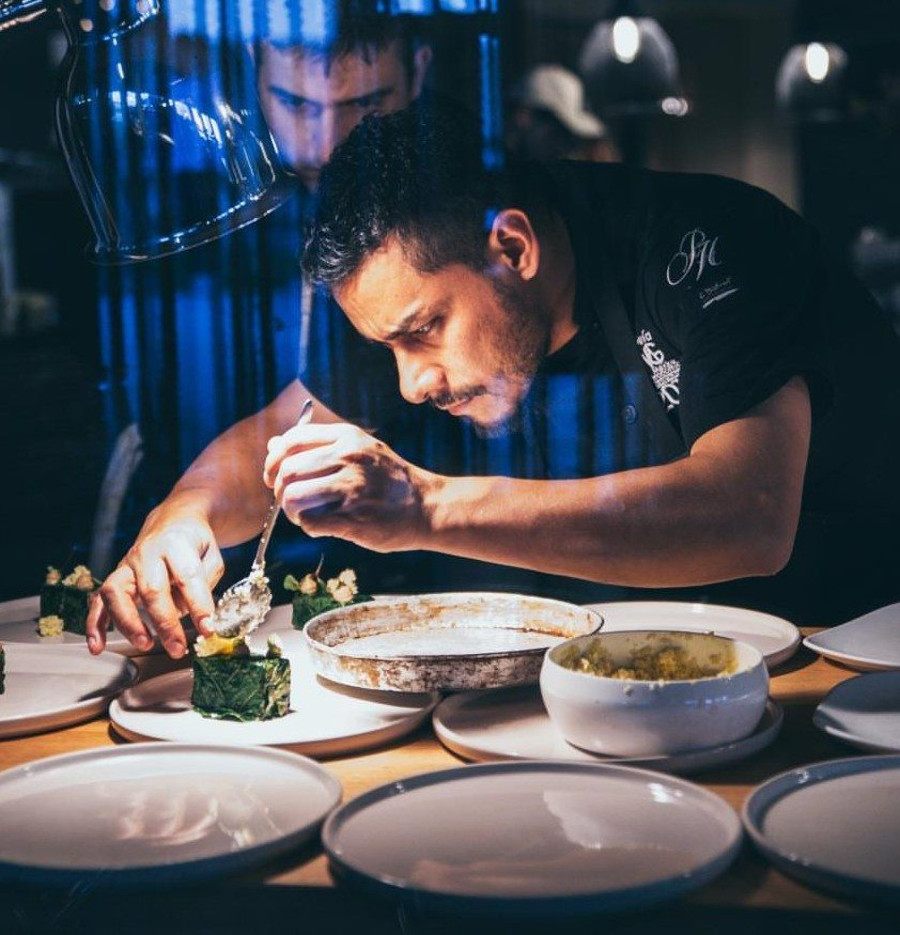 Who would imagine that a guy with red and orange highlights, painting and doing theater and skateboarding in the streets of Coyoacán, selling handicrafts and with dreams of being a rock star, would become an emblematic chef in Mexico City, facing their cultural concerns within the origins and miscegenation of Mexican gastronomy?

But life gives you surprises and life gives you surprises, as happened to Fernando Martínez who we had the honor of meeting in a talk he gave at the headquarters of the Iberian language school, Abanico In the center of Athens, Greece! He arrived there with his friend, Dimitris Malandrenis, an account manager in Mexico for a large multinational company with the dream of building a bridge between Oaxaca and Crete, where he is from.

In medium-sized rooms connected to each other, in a house located in the old part of the city, Fernando sat in front of a handful of no more than fifteen people and told us about his youth, his unexpected entry into the culinary world and his vision of Mexican cuisine. From a mother cook and grandmother who sold dinners in Michoacán, in a tale of soul, she told us about her first reluctant steps in the restaurant world, first as a garrotero and after refusing to continue in this position she hated, “climbing” to assistant and lavatrastes to "earn the potato" and to feed her newborn daughter.

Despite several dropouts due to his lack of discipline, he felt compelled to return to his job due to the commitments he already had at 21 years with a daughter in diapers. With perseverance, he was able to learn to dedicate himself to his work and even, with the passage of time, he managed to love him. At some point, Fernando realized that craftsmanship was not only reflected in a wooden, stone or metal object but it was also present in the food he prepared and in each plate he decorated.

A self-taught cook, his path was long, polishing himself in restaurants of a great variety of cuisines, forums and festivals, eventually winning the 2014 Mexico Cook of the Year Contest. Starting at Yuppi's Sport Café in Eje 5 and Insurgentes where a basic kitchen was managed , his work trip takes him to taste the Mediterranean cuisine of Ostrica in las Lomas, the Spanish of the Centro Castellano in Mariano Escobedo, the mestizo of Don Amador, French of Mustazas, Central Brasserie and Les Mustaches and a long list of learning spaces and performance that gave him the opportunity to form his own ideas and the ability to put his unique signature on his culinary creations.

The Yuban restaurant that Fernando Martínez directed until May 2019, had started as a Zapotec home cooking project. He made very special dishes and it was very different, which is what attracted people. Visited by connoisseurs such as Yuri de Gortari and the recently deceased Edmundo Escamilla, it came to their hands at a time when the restaurant was experiencing financial problems.

Oaxacan cuisine is very particular, little changed, very well preserved and cared for, characteristics that at first prompted Fernando to be hesitant to take charge of the dining room since he had never specialized in it. However, having done a “little bit of everything”, she decided to go and spend several days in the Oaxacan mountains with the master cooks to find out about their handling and secrets.

Despite the bans on entering the communal kitchens, she gained access to them through a friend, whose father was municipal president. He described his experience as one of the most beautiful of his life, observing ladies of 70 and 80 years washing dishes for hours and hours and cooking with a ceremonial attitude, in a very particular way.

Backed by the teaching he had achieved in the mountains, he was able to evolve Yuban, turning him into a profitable business. His idea is that the best way to preserve traditional cuisine is by making it current. By applying new techniques to traditional Mexican dishes, they become contemporary and attractive to young people who today have become detached from them. He expresses his opinion that the restaurant has become a point of food consumption like never before in the history of mankind, for the simple fact of the lack of time in our daily days.

It is at this stage of renewed face that Dimitri met Yuban and invited Fernando to visit Crete which was not one of the places where he had thought he would travel in his life. However, he was very surprised when he arrived on the island and saw nopales, avocado leaves, magueys and xoconostles and began to see the bridge between Oaxaca and Crete that his friend wants to build.

Seeing the passion that Dimitri carried for a country that was not his, he began to think that something must have Mexico that could cause this feeling. His own vision of the world is of a solid piece of land that was separated and at some point, someone came up with names and borders. He thinks that the human being is from a single culture with customs that have been adapted according to the territory and what each one offers. The techniques used in the kitchen of each place are adjusted based on the immediacy of what there is and the prevailing climate.

Fernando explained to us that his work has a modernist part. However, the dishes that are prepared in your restaurant have to have a point of origin so that people can identify with them. It is not allowed to lose the original flavor that is the point of reference, the point of recognition of the traditional dish.

In his presentation, the chef told us about the importance of memories, that is, the memories that food brings. As he showed us an image with the projector that had been placed on a table for the occasion, he explained how an element can be used to provoke such memories with contemporary techniques. As an example, he used a dish on Yuban's menu, a version of his based on Mole Chichilo. On the screen, you could see a plate with a decorated square in the middle, sitting on a thick sauce.

He told us that looking for a source of protein that is not so used, they had obtained a huge head of beef that instead of steaming, covered with plastic as the traditional way of preparing head tacos dictates, the meat had been carefully separated for later cook it with the sous-vide technique or vacuum in French. This cooking method allows to maintain the integrity of the food, vacuum packing it in plastic bags that are immersed in hot water of around 60 ° C. The entire volume of the water is kept at the same temperature with the help of a thermocirculator, thus ensuring that the meat is cooked without differences in cooking points.

As the meat cools, the collagen makes it harden again and by putting it on a tray, it can be cut into perfect squares that in turn are wrapped in chard leaves, as you could see in the image. The block of meat is served in a kind of esquite that is prepared, achieving a beef entomatado made of purple corn that, together with purple tomatoes, onion and epazote, gives it its appearance of this same color. On top, finely chopped Oaxacan chorizo is added and decorated with cress, a small plant found on the banks of rivers that has a flavor very similar to radish, thus avoiding the large leaves that this vegetable has.

When the diner tries the dish, a memory comes to him of something that he had tried in the past but that he cannot point out at the time. Asking the waiter what it consists of and answering that it is made from beef head, he immediately remembers the head tacos. Thus, the ingenious chef and his team get to reproduce a very Mexican meal using a technique discovered in 1799 by Sir Benjamin Thompson, a British physicist! and applied in a way that respects the origin of the food.

It was not the only example Fernando gave us in the talk. He showed us a series of photos of Yuban's menu, explaining the various elements that the dishes have and the variations that are made to them, giving emphasis and care not to lose their origins. For them of us not so familiar with haute cuisine, the chef managed to deliver a real essay that made us know and understand the philosophy behind its existence.

The presentation dynamics of a tasting menu and its timing were clarified for us. The awakening of hunger and the design of each dish within this logic. The first recognition bite where the dish is tasted, giving an account of its ingredients. The second of affirmation, the bite where the ingredients are reaffirmed and the third of farewell to the dish that apart from being the last, is responsible for its connection with the dish that follows.

In short, it was a fun and at the same time very educational night with a topic that is not understood by most of the population, being a highly specialized subject. In short, it is not usual to taste haute cuisine dishes on a daily basis and its philosophy and the true value of a three-bite dish that perhaps previously caused us laughter to see a plate with such a small amount of food could be understood .

Yuban is currently on hiatus and the chef has plans to open a new restaurant called "Migrante" with a kitchen of greater accessibility, more or less for the month of February 2020. His title, as he explained to us, refers to the mobility of the human being on the planet and the transfer of their culture, customs and consequently, their food.

There are plans for a second project that Dimitris Malandrenis has in mind and that he wants to carry out in the near future, which will aim to build the bridge between Mexico and Crete. There are many ideas that they want to carry out, one of them being a cooking night with Fernando and one more chef who will prepare Mexican dishes with ingredients from Crete!

The guy with the colorful hair has grown up and who knows if he can still balance on a skateboard. He never got to sing his rock songs to a crowd of excited and fired up people. However, there is no doubt that his cultural concerns, his dedication to a work that over time he came to love and the discipline and passion he developed for cooking, have managed to transform him into a star of Mexican gastronomy. There is no doubt that Fernando Martínez Zavala has a bright future with many ideas to be realized in the culinary world and perhaps, even beyond.