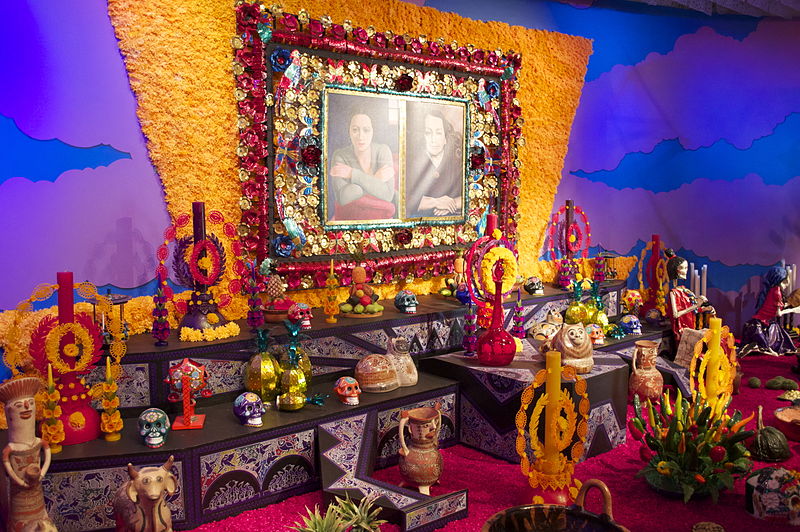 At the end of October, when the date of the celebration nears, the placing of "ofrendas" or offerings for the "Day Of the Dead" to honor them, is a tradition that we see in almost all friends' and family members' homes. On a table that is usually positioned in a room with access to visitors, an altar is assembled that in its most elaborate form, consists of seven levels but is usually of only two or three that represent sky, earth and the underworld that gave its place to purgatory, mixing the conquerors' belief in Catholicism with that of indigenous cultures.

The more complex, seven story altars, are a representation of the seven stages that a soul is required to go through so that its spirit may rest in peace. To the Otomies, the altar steps stand for the seven capital sins while the Aztecs associated them to the seven destinations to which the soul went to, according to the type of death each person suffered.

The Aztecs believed that as in life, so at death, one had to pass through eight levels or planes to reach Mictlan, where at the ninth level the god Mictlantecuhtli and his wife Mictecacihuatl awaited him/her. As in ancient Greece where the souls were accompanied to Hades, the Greek underworld, by the god Hermes, Xolotl was the Aztec god in charge of this task.

Today's altars are a conglomeration of Mesoamerican cultures, mainly that of Mexico, with that of the Spaniards. Instead of the ancient customs of the indigenous peoples disappearing, religious European beliefs were incorporated. It is customary to put offerings at the home of the deceased, on his/her grave and at church which are the three places that he/she were in contact with in life and death.

The offerings are made up of seasonal fruits, drinks and favorite foods of the dead, images of saints and photos of the dead, candles and candles, marigold flowers, crucifixes, copal and of course, dead bread. The latter in combination with the stews that are prepared and the fruits, is put in order to quench the hunger of the deceased while the drinks, to quench their thirst.

The candles are chosen according to the celebrated person's age, small for the young, large for adults. Their purpose is to light up the path of their return home so that they don't lose their way in the darkness. The image also acts as a guide and protection and along with the crucifix, symbolizes the defunct person's request to come back home.

The marigolds that represent the presence of death in life, are arranged in the form of a floor mat to show the deceased the way from the door to the offering. The smoke of the burning "copal" is the offering's spiritual part, its religious part. It's the route that the dead person's soul has to travel.

Salt is offered to children that were not baptized before their death in order to save their souls. To please them, at their arrival to the offering, they drink a glass of milk and there is chocolate, sweets and "piloncillo", unrefined brown sugar in the shape of a cone. Children and adults are celebrated on different dates: the first on the first of November and the latter, on the second.

The composition of the offerings

Offerings are made up of various elements Scent symbolizes the purification of the soul and is obtained by placing herbs and spices like thyme, rosemary, chamomile, marjoram and laurel. They are put in a pot of boiling water that is covered with a slab of perforated "copal". The aromas of the spices pass through its holes and guide the souls to where they used to live. Many Mesoamerican cultures used them to attract rain in times of drought as well as to cleanse or purify the souls of the living. Though the use of other types of incense is not common as they are considered oriental, their properties achieve the same results.

Scent symbolizes the purification of the soul and is obtained by placing herbs and spices like thyme, rosemary, chamomile, marjoram and laurel. They are put in a pot of boiling water that is covered with a slab of perforated "copal". The aromas of the spices pass through its holes and guide the souls to where they used to live. Many Mesoamerican cultures used them to attract rain in times of drought as well as to cleanse or purify the souls of the living. Though the use of other types of incense is not common as they are considered oriental, their properties achieve the same results.

A Day of the Dead celebration is unheard of without "papel picado", tissue paper with cut-out shapes. Paper, being of Asiatic origin, was unknown to the natives but "amate" which is fiber from the bark of wild fig trees, was used. It was painted with deities and made into clothes and dyed with available colors. Spanish influence contributed in the appearance of various types of papers, colors and patterns. Yellow and purple represented the duality between life and death.

The arc that is commonly placed on the upper level of the offering is made of yucca, reed or marigolds. It symbolizes the entrance to Mictlan, the eighth stage of the journey of souls.

Though water holds many meanings, the most common one is the simple offering of the vital liquid to the deceased to quench his/her thirst caused by the long journey. To the Mayas, the "cenotes", natural wells filled by underground rivers common in the peninsula of Yucatan, were considered entrances to the underworld and it is not unusual to see a bowl of water placed on the altar that symbolizes them.

Earth or soil is represented with corn and coco grains that form shapes on the ground. Fruits, spices and other ties to nature may also be used. Today, colored sawdust is commonly used. The mixing of Christianity with indigenous customs has annexed the ideology of "dust to dust" to the representation.

As in Christian tradition, the use of flowers in burial and other death rites is commonly seen in those of indigenous peoples, also. Marigolds, amaranth and cloud flower are the most prevalent for altar decoration.

No celebration goes without food and it most certainly could not be missing in that of the dead. They are offered their favorite dishes which in Mexican cultura are "mole", a sauce made of fruits, chili peppers, nuts and spices among its many ingredients, "tamales", steamed dough filled with meat, cheese, fruits, vegetable, chili peppers and other ingredients on a corn husk or banana leaf, "pozole", a traditional stew made with hominy (processed corn with the germ removed), meat or chicken and topped with radish, avocado and lime juice and other traditional delicacies. They are complemented with seasonal fruits like pumpkins, "tejocote" (mexican hawthorn fruit), oranges and of course, corn that could not be missing. Also essential is bread, in this case "pan de muerto" or bread of the dead, the sweet bread aforementioned which has replaced the corn bread commonly consumed in prehispanic ages.

Although any drink favored by the deceased may be included in the offering, alcoholic beverages like tequila, mezcal, pulque, a fermented agave drink and even beer are prevalent. Fresh fruit drinks and sodas nowadays are also very common. As mentioned before, milk awaits the younger deceased members of the family.

The "Calaveras" or skulls that are placed on the offering are made of sugar or chocolate and they probably have their origin from the "tzopantli", a row of impaled skulls of sacrificed warriors. They are a mockery toward death and the name of a living person is usually written across their brow.

A character that is always present on the Day of the Dead is the famous Catrina who has nothing to do with the indigenous people of Mexico but rather dates to the Porfirian age and was created by Jose Guadalupe Posada, a Mexican illustrator. Although the Catrina is related with this festivity and is known as a mockery of death, her true origin is that of sarcasm toward refined women of high society that used to hide their Mexican origin, replacing it with European chauvinism in the ruling years of Porfirio Diaz. sarcasm towards refined women of high society from the years of Porfirio Díaz that hid his Mexican origin, replacing it with European chauvinism.

Clothes and objects of the deceased family member's trade or work are commonly placed as an offering. Music is played to please them and it is not unusual to see mariachis with their instruments, singing their favorite songs over his/her grave. Truly impressive children's parties with a graveyard full of balloons and toys, are thrown for the younger deceased!

The Spaniards left their legacy to this festivity of indigenous roots, adding crucifixes, images, cards and sculptures of the defunct person's saint to help him/her get out of purgatory, if that is where his soul resides. Furthermore, a cross of ashes and one of salt as a purification medium are placed for the same reason. Rosaries of limes and "tejocotes" are not rare, hung on the top floor of the altar.

A model of a bronze colored dog of the Xoloitzcuintle breed can be observed on the altar. It represents the god Xolotl, the guide and companion of souls on their trip to the underworld. The dog is believed to help souls cross the river Itzcuintlan, the place of dogs that is the first step in reaching Mictlan. For the same reason, sandals are left for the dead to wear. It's possible that coins are left on one of the altar steps. This has nothing to do with tradition but rather comes from the ancient Greeks who used to leave coins in the tombs of their dead so that their souls could pay Charos to take them to Hades, the Greek underworld, in his raft.

The Day of the Dead is a truly live festivity of colors, aromas, sounds and joy. It is a celebration of the return of the family's loved ones that have been missed for so long, to the home that they once occupied in life. Two days of jubilance, celebrated at home and church, culminating in a family reunion at the cemetery. Graves are cleaned and offerings are placed everywhere that the deceased person's soul will pass through.

A soul is welcomed back home with honors and a petition for it to return the following year. It is fed, sung to and given new clothes for the return trip to the underworld. The deceased are treated with respect since nobody knows if we will not travel to Mictlan before they come back again next year. The following offering for the Day of the Dead could be for us!

Do you celebrate the Day of the Dead where you come from and if so, how? If you place an offering of sorts, how do you decorate it and what objects does it contain? Let us know how you and your family honor your ancestors!