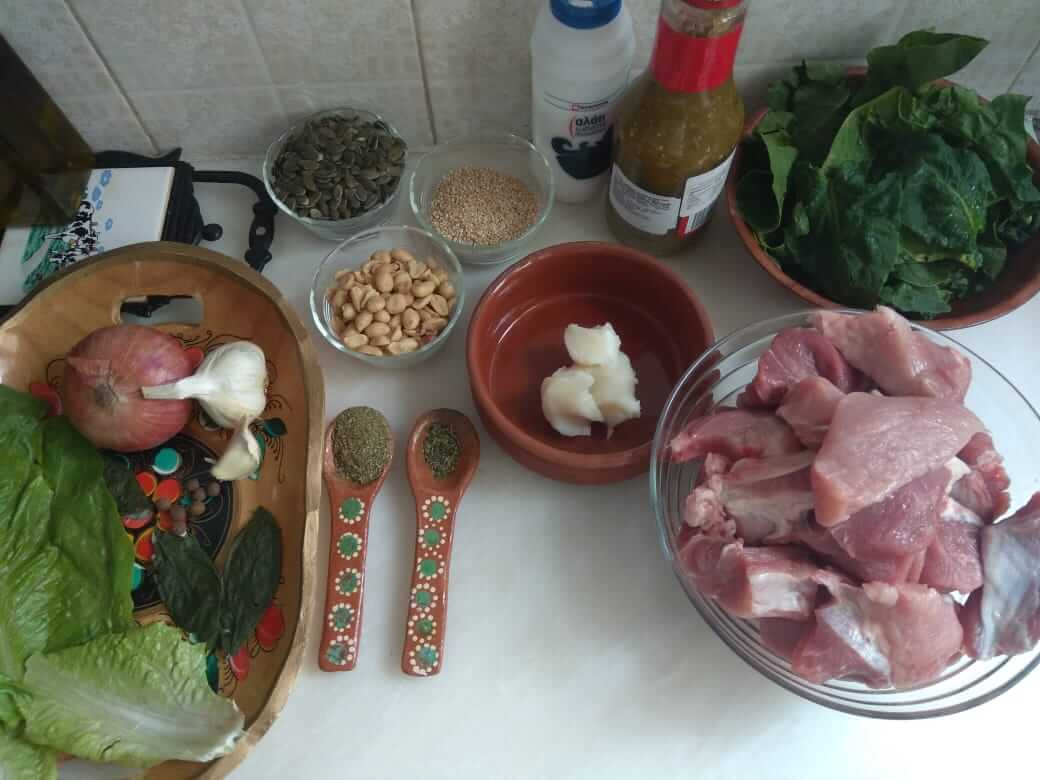 I can say that mole verde is one of my favorite foods, although when I was little, I don't remember trying it at home. Perhaps, it was not everyone's favorite and for that reason my mother did not prepare it. Digging into my memories, the richest mole I have definitely eaten is that of my sister-in-law Paty. Paty has always dedicated herself to feeding the souls of others. He puts so much dedication to what he does. Check, taste, smile and shake the pot again so that everything is with a good seasoning, with its seasoning.

The first time I went to his house it was under the pretext of looking for my brother who practically already lived there. I arrived just at lunchtime. Chance? I do not know. I prefer to think of it as a divine act. I swear I didn't know they would eat at that time.

One of her sisters opened the door for me and I asked about my brother. The girl turned around and with a voice that was not normal for a girl her age, she shouted loudly and firmly: Patyyyyyyyyyy, there they are looking for Roman, I think she is his sister.

I was waiting outside the house for someone to come out and sure enough, there she was with her blue checkered apron, offering me a smile and then inviting me to come over to her house. With a bit of regret, he told me that my brother was not there at the time. That he had had to go out for some things and would not be long in coming.

Do you want water? She asked me as she dried her hands on her apron. With so much heat that it was, it seemed like a fresh little water and I accepted it with great pleasure. Something in the kitchen smelled wonderfully and I began to feel somewhat uncomfortable, like those cartoons where the smell of something delicious is presented in the form of a hand and reaches the nose, from there to pull you to where the delicacy was.

Suddenly, I had an uncontrollable desire to eat and my triples screamed, so much so that Paty had to turn around to keep from laughing. I got up to say goodbye and leave the message for my brother, however Paty with a shy voice said to me: do you want to stay and eat with us?

In life, one has to make decisions when faced with very difficult questions, sometimes. But that was not one of them. By repeating it twice, I had no other choice. My mind clouded, I forgot my mother's order and accepted her invitation.

Let's do it! You had to help set the table as soon as possible. Paty's sister gave me five plastic tablecloths with large colorful flowers, with a small white background, ideal for hiding anything that fell from the plate. On the table, there was already an orange jug that was sweating from the cold content of the lemon water. Some cloth napkins with engravings of tomatoes and chili peppers, protected the warm tortillas for the moment to accompany the mole.

While we were setting the table, my brother arrived and finally, lunchtime too. What a thrill!

The first to receive his plate was me. That was the moment when I fell in love at first sight with the green mole. I saw it, fresh from the clay pot, steaming and fragrant, accompanied by a good portion of refried beans and a white rice with vegetables that brightened up the dish even more. My mouth began to salivate and surely, my pupils dilated.

Sharing that magical dish with them made me feel so honored by their invitation. The meal passed with a pleasant conversation, although my answers were limited to a mmju, ajja and mmm since I kept my mouth occupied and well full of mole. Paty looked at me askance, wondering if I liked him or if I was just pretending not to snub him. In a sweet voice he asked me if I wanted some more. Before I could answer, my brother gave me the murderous look, which without mistake translates into don't even think about it!

It was the moment that I remembered my mother's commission and how upset she would be with me and Roman. I got up quickly to put my plate in the kitchen and run away. I thanked Paty for her delicious food and got ready to head home. "Ahhh, by the way Roman. My mom told me to go to the house to help him and that you won't be long. "

Since then, my dear Paty every time she made green mole or pork rinds in green sauce, she invited me to eat at her house. Until we moved to another city and I had to ask her for the recipe, although I confess that it was never as rich as hers. In my visits to the capital I knew, and still know, that I will always have a plate of green mole waiting for me at your table. Thank you Paty and thank you Roman for meeting her!

If you have neither chili peppers nor tomatillos, you can occupy a can or a jar of mole verde.

Cook the pork or chicken meat, according to your choice, with half the onion, 2 cloves of garlic, the fat peppers and 1 bay leaf. When the meat is ready, strain it and leave the broth reserved for the preparation of the mole.

In a frying pan, the seeds, peanuts and sesame seeds are toasted separately, taking great care not to burn them. In a comal the green tomatillos are tateman, along with the rest of the onion and garlic and the jalapeño peppers. In another pan, marinate the poblano pepper and then remove the skin, devein it and remove the seeds, preparing it for the next step. With the comal still hot after finishing the tomatillos, put all the spices to lightly toast.

Put a pot over low heat and pour the 2 tablespoons of butter or vegetable oil. As long as the butter is heating, begin to grind the ingredients with a little broth to facilitate grinding. When finished, we empty them into the pot with the hot butter and add a cup of the meat broth. The amount of broth that is added to the mole depends on how thick we want it. The mole is left over low heat, stirring sporadically to prevent it from sticking. When we notice that the oils from the seeds are already visible on the top of the mole, we add the meat and leave on the fire for 5 to 10 minutes and turn off.

Accompany your mole verde with rice, beans and of course some warm corn tortillas.

Remember that if you don't have tomatillos and chili peppers to prepare your green mole or you prefer to make it with pasta, visit the Directory of Mexican Food Products in Europe to find a store near you.

How do you prepare your green mole? Leave us your favorite recipe to try!

If you want to prepare your molito more easily, using a jar paste and adding your own touch, click the button to watch a video.