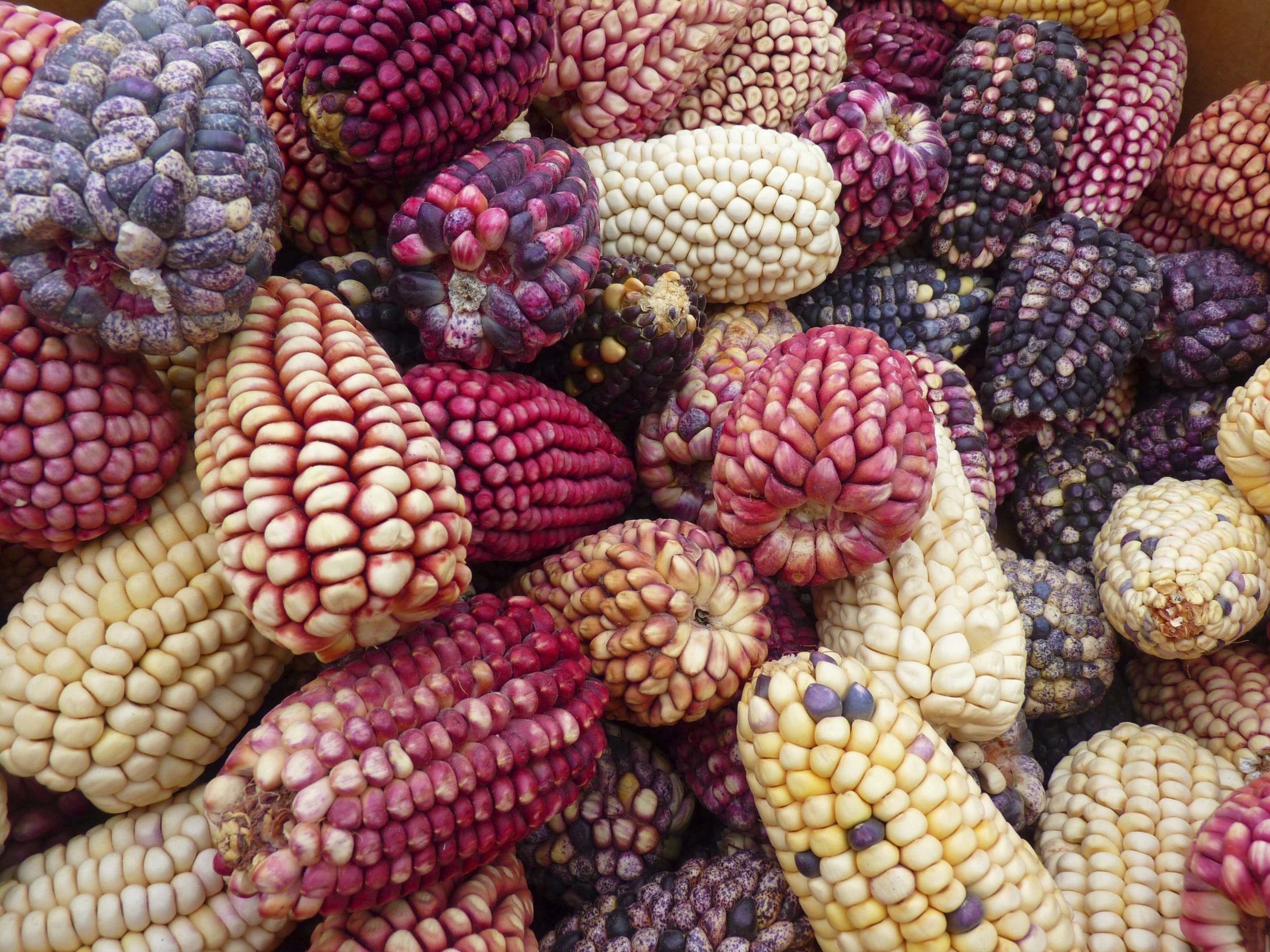 Cereal grains are the cultivated fruits that provide the largest amount of food for humanity and about half of its caloric requirement. Of around 12 cereals that are used for this purpose, only wheat, corn and rice are sources of importance, fulfilling 94% of human consumption. However, each cereal is preferred in different regions of the world. While wheat is favored in North and South America, the Middle East, Central Asia and Europe, and rice has no competition in Asia, corn is preferred in South and East Africa, Central America and Mexico. In our days, the multiple faces of corn mark their presence in the various products that are fabricated from its grain and practically from the entire plant.

Looking at Mexico, the population's inclination towards corn is more than obvious. The annual per capita consumption of various grains in 2020, was 331.9 kilograms of corn, followed by wheat with a huge difference, at 53.1. Rice comes in last place with a consumption of only 10.1 kgs. per person.

In Mexico, there is another important grain that must also be taken into consideration: beans. Although in the same year that the figures reported above were given, its consumption did not exceed that of rice, reaching only 9.9 kgs. per person, it contributed to 36% of the population's protein intake, which is considered a significant percentage. However, Mexicans are known as the "sons of corn" for a reason. Their culture and development are rooted in this grain and it has long been a part of their daily existence.

Corn through the centuries

The term maize in the western world is used interchangeably and generally, because all the grains that were marketed by the British, when they began to transport them from the Americas to Europe, were called maize. The name of the maize grain stayed that way because it was the most common of all that was transported. Carl Linnaeus, the Swedish naturalist who was responsible for developing the binomial nomenclature to classify animals and plants, included the name as a species epithet in the botanical classification Zea (Zea mays), based on its common name.

Corn is considered to be one of the first plants to be cultivated by humans, 7,000 to 10,000 years ago. Although there are several theories about its origin that places its beginnings in the Himalayas or even the Andes, most research points to Mexico as its cradle.

By collecting and cultivating plants best suited for human consumption, corn, within a couple of millennia, was transformed by Native Americans into a crop with larger ears and more rows of kernels. This changed it to a better source of energy. By developing corn, the amount available for consumption increased and as a result, groups of people stayed in the same place for extended periods of time. The prolonged stays in their turn, resulted in the transformation of these populations' character, from nomad to fixed or semi-fixed.

From Mexico, corn quickly moved to all of Latin America and the Caribbean and then crossed over to the United States and Canada. European explorers and conquerors took it to the old continent and from there, traders introduced it to Asia and Africa. This led to the popularization of one of the most important grains of the human race.

It is important to keep in mind that the way in which corn is processed and consumed varies from one place to another and there is a part that is considered milling residue. However, although it's residue, it cannot be considered waste, since it is used in the production of a wide variety of products.

In the Aztec nation, in particular, and most of Central America, nixtamalization, a process that adds nutritional value to corn, was developed. By way of cooking in combination with lime, the grains are immersed in water and after washing them a minimum of two times to remove organic components and excess alkali, nixtamal, which is used to produce masa (dough), is obtained.

With the masa, tortillas, a staple food in Mexico, are made. In much of Latin America, masa is used to prepare arepas, which for many South American peoples, are of the utmost nutritional importance. Due to this, Mexico is one of the largest importers of corn worldwide, despite the fact that it produces it.

With a consumption of 331.9 kilograms of corn per person, per year (2020), it is not difficult to comprehend why Mexico is forced to import corn to cover its needs. In 2020, an area of 7,472,357 hectares was planted and 7,156,391 were harvested, leaving a damaged surface of 315,966 hectares. The obtained production was that of 27,424,528 tons of corn. Doing the numbers, almost 40 million tons are needed just for the consumption of the Mexican population, not accounting for other products manufactured from this grain.

Not all corn is created equal

The grains of this cereal with the greatest impact on humanity are white and yellow. Of course, in Mexico, there is a much larger variety that includes 64 breeds, 59 of them native, with grains of different colors, such as blue and red. However, worldwide, it is the white and yellow grains that are consumed and marketed the most.

While corn from the United States is mostly yellow, corn from Mexico tends to be white. Yellow corn is used in the production of food for livestock and animals in general. It is considered that its deterioration is faster and as a consequence, it is consumed fresh. Even so, in recent decades, new variants have been made in the United States that last longer and are even sweeter.

There are some curious facts about the consumption of corn that most of us do not know, but that have an effect on its consumption. For example, yellow colored maize is not popular in Africa, with white being the preferred grain. The reason seems to lie on tradition, as people prefer to eat white products. Yellow corn is considered food for the poor and is associated with food assistance programs.

However, this preference means less consumption of β-carotene and β-cryptoxanthin, which are converted to vitamin A in the digestive process and are found in higher concentrations in yellow maize. Also, the preference for flour made from white corn, allows for a lower proportion of fibers, vitamins and minerals, but which, in any case, would not be considered to be of significant levels.

Products and uses of corn

There is a wide variety of products derived from corn and of course, naming each of them, apart from being almost impossible, would be beyond the scope of this article. Undoubtedly the main reason for planting corn is its grain. Even so, the entire plant is used, from its leaves, its stem, its fruit and even its cob for multiple implementations.

Starting from human nourishment there is a great list of products that come from this miracle grain. The most common derivatives are flour, tortillas, cereals, popcorn and cornstarch. Corn, atole, tamales, pozole and the more than 600 dishes made in Mexico, not mentioning those of other nations, must not be forgotten.

A popular common derivative, is corn syrup. Made from starch, its primary use is in gastronomy, more than anything, confectionery, where it is used to achieve volume, texture and viscosity. In fact, due to its high fructose content and its frequent use in cooking, it has gained a negative reputation as a cause of obesity and the respective health problems that accompany this disease.

Nevertheless, it is a very important ingredient in the preparation of many products. It can be found in a wide variety of food such as bread, desserts, ice cream, jams, gum and other sweets, but also in sauces, dressings, pickled products and baby food. However, perhaps its most robust use is in the production of soft drinks and beer. The abuse of both drinks, is known to result in obesity, which has become a major issue in several societies, including those of Mexico and the United States.

Corn grain is also used to feed animals, mostly ruminants, but also birds and others. The maize plant is also used as fodder and is valuable in handicrafts such as rugs, baskets, hats, etc.

In addition, it is used to make products that, although of common, daily use, one would hardly think that they are derived from corn. For example, sorbitol, an ingredient found in toothpaste, blush, eye shadow, and hand soap. Citric acid, which is found in shampoos and conditioners, is also extracted from corn. Starch is used to make paper and to remove chalk and crayons from their molds. Post envelopes are glued with the use of nitrocellulose and there are even shoes whose soles are produced from corn. There is an endless number of products that we never imagined are derived from the stalk, the leaves and the grain of this miraculous plant.

Finally, we must reflect on the manufacture of bioethanol , which derives from corn and the environmental, economic and social damage it can cause. To understand the problem, it is imperative to carry out more and new studies about the manufacture of this product and its necessity, within the framework of contemporary global challenges.

A chemical compound, bioethanol is obtained through the fermentation of the sugars contained in the corn grain. It is used by mixing it with gasoline, thus replacing petroleum derivatives. While the intent is to decrease carbon emissions, views have emerged that it may do the complete opposite.

Two of the largest supplying countries, Argentina and Malaysia, have dedicated many hectares to planting corn in order to manufacture and export bioethanol to countries such as the United States, where it is required in large quantities. In the U.S., oil companies are obliged to mix their final product with 5% of ethanol. Although corn is also cultivated in the North American nation, not enough is produced to meet demand.

The argument against the use of bioethanol is in everything that its production implies. Fertilizers, the transportation of biomass, processing needed in order for the product to reach its final form and finally, getting it to the consumer, are all parts of the necessary operation for it to be implemented. The sum of the emissions involved in this entire procedure, may be greater than if the oil was never mixed at all.

The other issue that arises, is the actual use of the land needed to plant corn and produce bioethanol. So that land may be available, many underdeveloped countries destroy their forests and jungles, which means a lower capacity to eliminate the CO2 emitted by industrialization.

In addition, bioethanol tends to be sold to the West, where it is rewarded at a higher price than if corn were sold as a food product. This implies that, as the demand for this grain rises, its price also increases, excluding underdeveloped regions from its reach. If we add the problem of the war in Ukraine, and taking into account that both countries involved are among the largest suppliers of corn worldwide, many populations, such as those in Africa, are in serious danger of experiencing large-scale famine.

There is no doubt that the distribution of agricultural land, the products that will be grown from its sowing and even the actual grains sown, must be placed on the table again. It is true that corn has multiple faces with many possibilities for manufacturing products, nevertheless, humanity does not always take the best decisions, thus allowing for crises to unfold when they could be avoided with strategic planning. Under the circumstances facing the world today, do you think it is better to plant corn to feed people or to produce fuel to heat and move us? In your opinion, should we dedicate more agricultural land to plant corn and other grains that could avert the danger of famine? Give us your comments. Every idea is important. We all live on this planet. For the moment, there is no other. Let's take care of it!