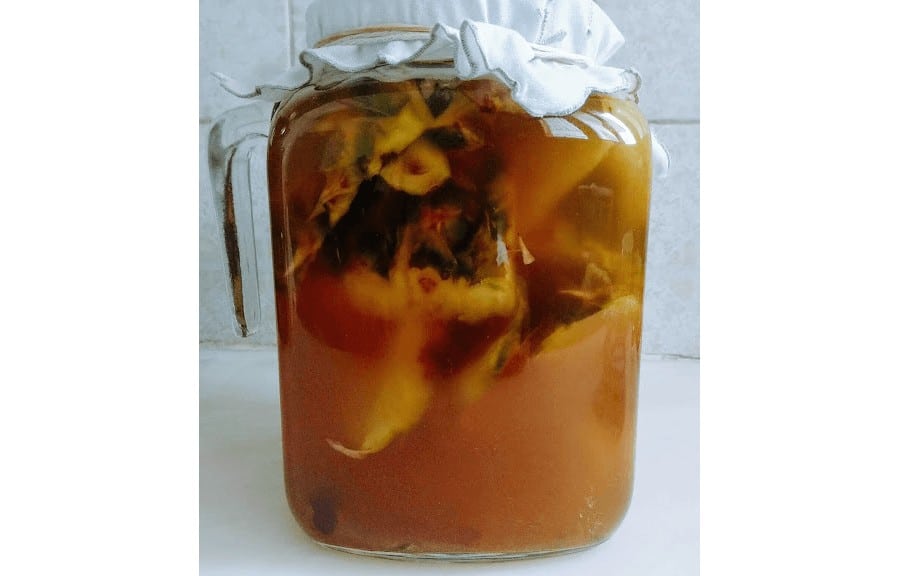 One of the images that I have imprinted in my head of the roads of Mexico is of the tepache vendors with their barrels, with the word "TEPACHE" painted in large letters to highlight and stop the thirsty passengers of the fast cars. Most of them would pass them without noticing them but if one were to notice them, one would see that there was almost always someone buying their glass or bag of this sacred pre-Hispanic drink.

Mexican cuisine since the pre-Columbian era has used culinary techniques for the conservation, production and creation of its food and beverages. Among them is the fermentation carried out with local products such as corn, cocoa, prickly pears, tunas, mead and tree bark among others, giving rise to a great variety of preparations that still persist today.

These preparations were of great importance, not only in the ritual activity of each region, but also formed an indispensable component in the daily diet of different social groups. It is estimated that in Mexico, there are still around 200 fermented beverages and foods, among them tesgüino, pozol, sour atole, pulque and tepache to mention a few.

With the arrival of the Spaniards, some beverages underwent changes in their elaboration, as a result of the opening of new trade routes with neighboring lands to our country, which allowed the introduction of new materials. Such was the case of the "tepache" that used to be prepared exclusively with crushed corn kernels and water. The brown sugar was added to this preparation, which was used to sweeten it and accelerate the fermentation process. Little by little, small pieces of fruits were added, such as guava, apple, orange and pineapple, adding spices to give it an aromatic touch.

This amber colored elixir has different versions of its etymological origin. Some historians attribute its name to the word Tepatzi, from the Opata language which means "Place of beautiful women". Another statement from the Nahuatl word would be Tepatl, having as a translation “corn drink”. A third meaning is preserved that suggests Tepachoa, also a Nahuatl word that means "to grind, to press something with a stone."

The "tepache" has a great diversity in its ingredients according to the region of the country. Among them, the piloncillo or panela, pulque, fruits, cereals such as corn, rice, barley stand out and in some communities of Oaxaca, the use of tíbicos for its preparation.

The Pápagos, an indigenous group from the states of Sonora, Sinaloa and Nayarit, prepare it from young corn, with a select part of the community participating in all the fermentation processes that are carried out in gratitude to the harvests.

The Jalisco area has drinks prepared only with corn, acquiring the name of tejuino or tesgüino, however it is said that pineapple tepache arose in that state. This is prepared with the pulp and pineapple peels, adding cinnamon, cloves, pepper and brown sugar, it is left to rest for 72 hours for fermentation. Once ready, it is served with a large amount of ice.

In the lake area of Michoacán, the preparation method consists of two parts. The first, where the metate plays a very important role when grinding corn grains, banana peels, pineapple and tamarind. It is then transported in clay pots for fermentation and when it reaches the desired point, slices of pineapple and spices are added that give that aromatic touch to the tepache, cloves and cinnamon.

If we talk about Mexico City and Toluca, its elaboration does not vary much to that of Jalisco. The pulp, pineapple peels and bran are the main ingredients. The tepacherías offer it in cold jars with enough ice and in the streets you can see the well-known tricycles that carry the orange barrels. The tepache that is offered in the tianguis, is served in plastic bags, and at the request of the client it can be prepared as if it were a michelada, with its glass of frosted chili pepper and accompanied with a quantity of chamoy in the bottom.

The regions of Hidalgo and Puebla, usually prepare it with pulque and some fruits. Here, two sweeteners go hand in hand in its fermentation process. In addition to the piloncillo that gives it its amber color so particular to the tepache, it is accentuated even more with the honey that is added and the spice that gives it its peculiar flavor is anise. The ready-made ferments are offered as a daily drink or for religious festivals.

The state of Morelos is not only known for its beef jerky, but also for the tepache, which is the drink that will accompany the diners' food. Prepared here also with pineapple pulp and peel, some producers often add burnt sugar to it.

In the regions of Guerrero, Veracruz and Oaxaca, indigenous Mixtec, Amuzgo, Zapotec, Chinantec, Chontal, Chatinos, Huaves, prepare it in their mayordomías (religious festivals) to thank the benefits that Mother Earth provides them. In these areas of the Mexican Republic, there are up to five ways to make tepache. You can find the one that is produced with the grains of corn and panela or piloncillo in which pulque is occasionally added. Another type of tepache is prepared with the pulque seats mixed with water, ears, pepper and corn leaves left to ferment for a day. That of the Mixtec contains fruits, chili, panela and depending on the fruit, its strong flavor is reduced when the fermentation process is finished with a little water.

The triquis (indigenous people of Oaxaca), for example, make what is known as "tepache de tibicos" that are originally from our country. Its globular mass is similar to cooked grains of rice, also known as kefir or Bulgarian water. The also known "tepache de timbiriche", a fruit that belongs to the pineapple group, is often used to prepare tepache with the help of strawberry pods.

In Ayoquezco de Aldama, Oaxaca, which every year celebrates a festival dedicated to the tepache that symbolizes rainwater, the women prepare early to select the pineapples that will be part of this delicious drink. Once cut, it is passed into large containers where it is crushed at its metates. The ladies take turns with each other to carry out the grinding. In other parts of the state, not only pineapple is the main ingredient of the preparation, but also pulque is added to this drink that is sweetened with brown sugar or panela, with a touch of cinnamon, cloves and pepper. Taking care of each process in the elaboration, the grinding is deposited in buried clay pots that are jealously covered with a cloth and a cross that blesses the preparation.

Veracruz brings to the tepache the toasted flavor of corn kernels that are brought to the embers, before being submerged in water with the ears of corn or panela. The fermentation technique is accelerated with the heat of the embers of the stove for 6 hours. Arriving at the end, ice is added. However, it is not the only tepache made by the locals. In pineapple, capulín and tamarind season, the fruits are used to prepare a mixture with panela and water, fermenting the mixture for a period of 48 hours.

In much of the national territory, the tepache enjoys the preference of many of the inhabitants. The fermentation process raises its alcohol content to 1%. It can be found in tianguis, popular markets, city squares or on the tricycles that run through the different neighborhoods. Tepache, apart from being a refreshing drink, provides many health benefits. It offers the advantages of fermentation with a high content of probiotics that help protect the intestinal flora. Another of its characteristics is its great contribution to the immune system, due to its vitamins A, B and C. They say that a hangover cures the same as kidneys.

The benefits of tepache

The use of metal containers is not advisable in the fermentation processes, since most of the fermented ones contain a degree of acidity that on prolonged contact with the metal, can produce an oxidation of this material, leaving residues in our drinks or food. that could contaminate it.

In a small pot with hot distilled water, we dissolve the panela. If you do not have brown sugar or brown sugar, you can use muscovado sugar. Also add the cinnamon and cloves and leave it to rest until it is completely cold. In a glass or clay container we will put the pineapple shells and the water that the piloncillo contains with the spices. If you like, you can add the pulp of the pineapple, adding an extra 1/2 liter of water. Once everything is well integrated with the use of a wooden shovel, we cover it with a cotton cloth and leave it for 72 hours to ferment. It is advisable to keep it in a cool place where light cannot reach it. It is uncovered every day and with a wooden shovel we shake and cover it again. If the temperature is very high in the place where you are, you may only need 48 hours for fermentation.

Once the fermentation time has passed, it will be visible, since a lot of foam will form on the top, generating a kind of gas. To cut the fermentation process and prevent it from turning into vinegar, it is necessary to strain it and put it in the refrigerator. It can be consumed with ice and add small pieces of orange or prepare a michelada de tepache. Enjoy it!

Do not forget to share with us if this sacred drink is to your taste, how you prepare it and some tips that can help our community.